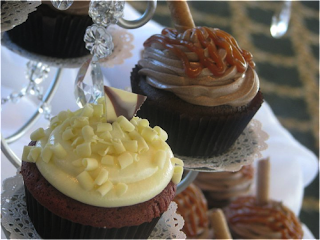 I absolutely LOVE cupcakes. After working in a bakery and now with The Festival of Chocolate… it made me wonder WHO came up with the brilliant idea to create the perfect 2-bite treat.

Most people think the term “cupcake” comes from idea that a cupcake looks like a cake cooked in a cup. However, after some research, it turns out that cupcakes are so named because this was a snack that could be stored inside a protective athletic cup during baseball games. Abner Doubleday himself may have been the first to tuck a cake there, and he was known to reach down for a nibble of his “cup cake” even while running the bases.

The first cupcakes did not have frosting as we know it, but instead were topped with lard as a kind of cake-moistening gravy. And, get this…Winston Churchill was the first person to suggest a kind of sweet frosting on the top of the cakes.

Lard to Buttercream…that must have been a no brainer!

So, if I’ve gotten you craving a cupcake now, it’s about to get even more tempting. We just got word that Cupcake Cottage is bringing their Triple Irish Crown and S’mores cupcakes to The Festival of Chocolate.

Their cupcakes are as decadently delicious as they are beautiful. And, yes – for my VERY difficult job, I had to try a few. My drop-to-the-knees favorite was Boston Cream. (a REALLY Moist Cake, Injected with Rich Cream, Topped with Thick Rich Chocolate) Back off donuts…there’s a NEW Sheriff in town. http://www.cupcakecottage.net/index.asp

For those of you unfamiliar with this Royal Palm Beach gem, the Cupcake Cottage is a gourmet cupcake boutique owned by Lisa Hamilton. Just one year ago, Lisa’s love of baking took her from a life of building condos, high rises and shopping plazas to sweet days focused on constructing the perfect cupcake. Smart Lady!

CUPCAKES BY THE NUMBERS

One cupcake is consumed for every adult in the US every day. If you haven’t had yours, you better wrestle one away from that chubby dude standing in front of the bakery.

The number of cupcakes eaten last year have more mass than the entire Earth!